How do Salimetrics assays work? 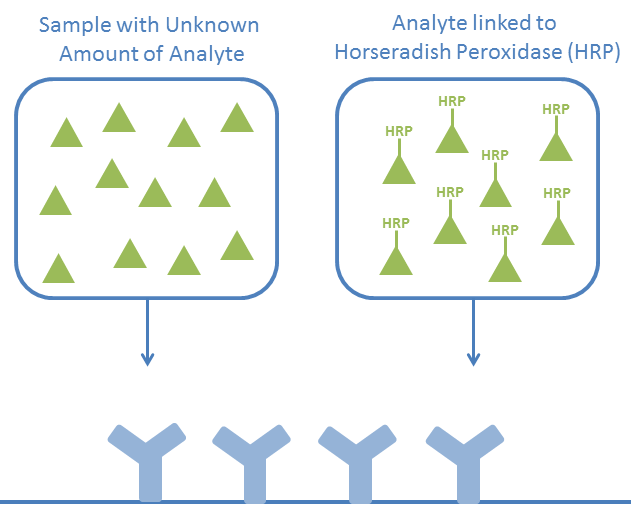 Step 1:
Antibodies specific to the analytes to be tested are coated to a microtitre plate.
A mixture of your sample (including an unknown concentration of the desired analyte) and the desired analyte (conjugated to HRP) are added and compete for the antibody binding sites.

Step 2:
The microtiter plate is washed and any unbound sample and conjugate are washed away.

Step 3:
The substrate TMB is added and reacts with the conjugate, yielding a blue colour.

Step 4:
The reaction is stopped with sulfuric acid and the colour intensity is measured.
The colour formation is indirectly proportional to the amount of analyte in the sample.

Step 1:
Saliva with unknown amount of alpha-amylase is added to a microtiter plate.
Step 2:
The chromagenic substrate 2-chloro-4nitrophenyl-a-D-maltotrioside (CNPG3) is added and hydrolized by alpha-amylase to yield 2-chloronitrophenol (CNP), chloro-4-nitrophenyl-a-D-maltoside (CNPG2), maltotriose (G3) and glucose (G).
Step 3 & 4:
After 1 and 3 minutes, the formation of CNP is spectrophotometrically measured at 405nm.
Step 5:
The rate of formation of CNP is directly proportional to the alpha-amylase activity in the sample.